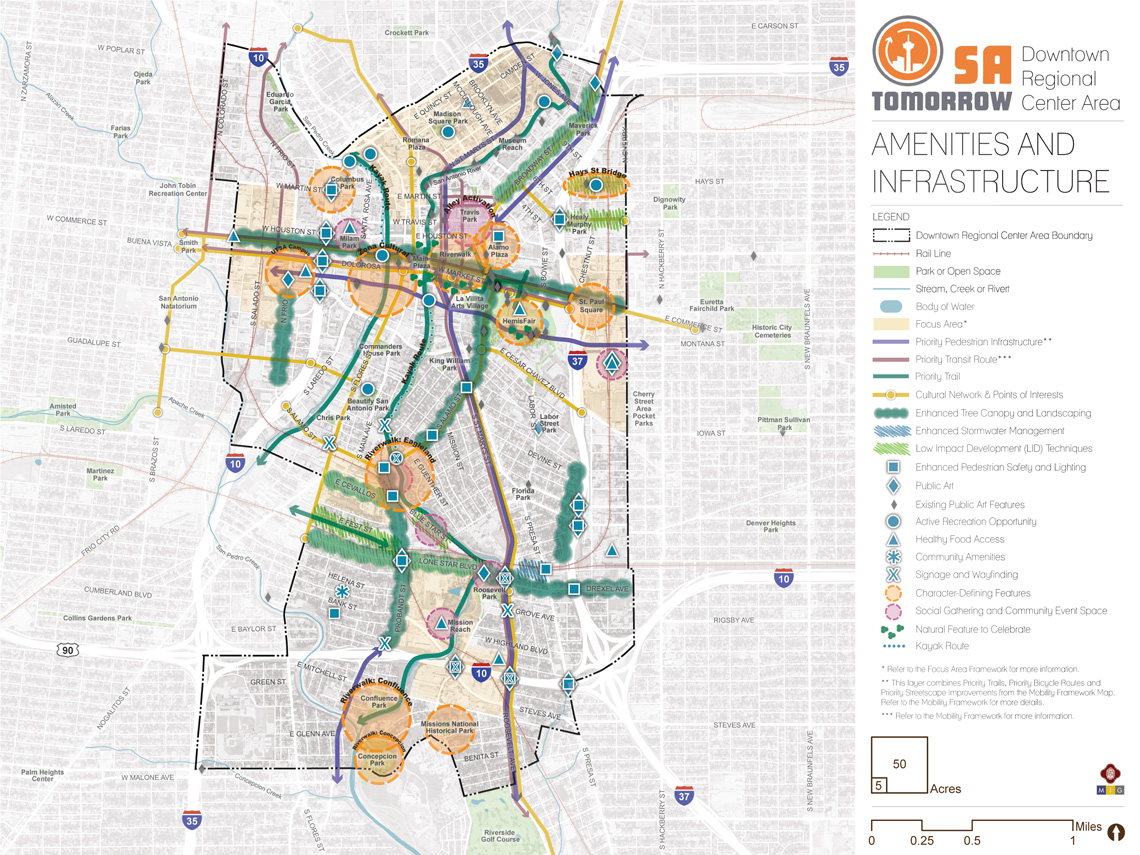 The Downtown Area Regional Center is the historic and cultural center of the City and home to the world renowned Riverwalk. The area is experiencing a renaissance of growth supported by the City’s efforts to revitalize the urban core with the “Decade of Downtown” and SA2020 movements. Downtown is evolving into a vibrant mixed-use area with a combination of employment, services, and housing all centered on the great historical and cultural destinations. The Downtown Area Regional Center had 83,800 jobs in 2016. Downtown is the center of San Antonio’s economy, anchored by the tourism, public administration, education, and health care industries. Nearly 20% of employment in Downtown is in Accommodation and Food Services, a larger share than the 11% in the County overall. The next largest employment sector is Public Administration; with close to 18% of area employment (this sector comprises 4% of County employment). Other large employment sectors are Health Care and Social Assistance (13% of Center employment), Finance and Insurance (close to 10% of Center employment), and Professional, Scientific, and Technical Services (close to 10% of Center employment). Economic attributes of the Regional Center include:

The Downtown Area Regional Center is major employment node for the County and has 9.9 million square feet of office space. The office market has struggled until recent years as new office development has mainly occurred on the edges of the City near Loop 1604 over the past 10 to 20 years. As a result, office vacancy rates are higher in the Downtown Area than the County average, and average rental rates are slightly lower than the County average. There has been a recent increase in office construction in the Downtown Area as new housing and public investments have attracted employers back to the City Center. There have been 5 new office projects built in the area since 2010, including the Phipps Building and Camden Medical Center, totaling 300,700 square feet of new space. The new Frost Tower is under construction and will add another 460,000 square feet of office space to the Downtown area. This is the first new office tower to be developed in Downtown since 1989, and its development is seen as a major step in the evolution of the Downtown area. The Civic Park development at Hemisfair is also planned to add new office space to the surrounding area.

The Downtown Area Regional Center remains a major entertainment and shopping destination. The center currently has 6 million square feet of retail space, however the inventory of retail space in the area has decreased by 202,000 square feet since 2005. New retailers and restaurants have largely occupied existing buildings or are part of larger, mixed-use buildings. The growth of the area’s restaurant and service commercial uses has been robust and has begun to diversify in order to serve residents and workers living and working in and around the Downtown Area, expanding beyond their traditional target audience of visitors and tourists. This is evidenced by the growing neighborhood commercial districts (Southtown, Blue Star, SoFlo, and Broadway Street Corridor) and the addition of a new HEB grocery store in the Downtown core. Vacancy rates for retail in the area are lower than the County average and rental rates are higher than area averages indicating continued demand. Growth of the tourism related sectors continues as well. There are 78 hotel properties in the Downtown area, totaling over 9,000 rooms and almost 900 new hotel rooms have been added in the past decade. At least 8 projects are under construction, being renovated, or are proposed for the area, which will add over 600 more hotel rooms to the inventory.

The industrial building inventory in the Downtown Area Regional Center has been declining as these sites are being redeveloped for higher intensity uses. The area has an inventory of 6.7 million square feet of industrial space, but the inventory has decreased by 432,000 square feet since 2005. Rental rates are higher than average and there are low vacancy rates indicating demand for the space that does remain. The role of industrial uses, and space devoted to them, are diminishing but there are still areas that are needed to serve the area and the larger region.

Innovation is a major theme of the guiding policy documents for the City of San Antonio including the SA Tomorrow Comprehensive Plan and Forefront SA. A goal for economic competitiveness in the Comprehensive Plan is to “create an economic environment that fosters business creation and innovation.” The Downtown Area Regional Center is a focal point for business creation and innovation. The innovation economy is the connection of knowledge, technology, entrepreneurship, and innovation as a means to spur economic growth. To drive higher productivity and innovation, investments and policy interventions are needed to create and support partnerships between the public and private sectors.

In order to understand the economic strengths and weaknesses of the Downtown Area Regional Center as an environment that supports innovation, an innovation audit was completed to inventory and measure the attributes which contribute to this culture. The Downtown Area Regional Center innovation audit found that the area currently has many of the physical assets that are desirable to employers and employees. However, the area is in need of more modern workspaces of all sizes to support the growth of new businesses. Although Downtown has attracted a collection of technology companies and support agencies for start-ups, the area still needs to increase the employment opportunities for workers in the technology industries and the number of new and growing technology businesses to reach a critical mass. A major missing element to innovation and commercialization of ideas and products is the presence of research activities and an anchor education institution. UTSA’s expansion of its education offerings and the creation of a National Security Collaboration Center can help increase research activities in Downtown and help translate this research into new businesses and ideas.

Invest in and leverage the growth of the UTSA Downtown Campus.

UTSA’s plan to triple its Downtown enrollment and introduce new colleges and schools to its Downtown campus is a major economic opportunity for the City. The partnership of the City, County, and UTSA to make this expansion needs to be furthered leveraged to generate additional economic activity and attract new business opportunities to Downtown. The investments into the growth of the Downtown campus will needed to be supported to ensure students, faculty, and staff can access and live near the campus. The expansion of the campus is also an opportunity to connect economic activity in Downtown to the Westside and utilize VIA’s Centro Plaza and transit services to connect the campus to the rest of the City and region.

The growth of the tech and start-up cluster in Downtown creates an opportunity to spur further businesses creation, attract new technology businesses and ideas, and foster innovation through the commercialization of research within UTSA and the business incubation support entities in the area. The Tech District of San Antonio should be further supported through the growth of a variety of workspaces and configurations, further growth of residential uses in Downtown near the Tech District, and the investments in amenities and infrastructure that will increase the attractiveness of the District to businesses and workers and utilize and showcase technology solutions within public infrastructure.

Support and grow entertainment, arts and culture activities, organizations and businesses in Downtown.

Proactively guide the growth of tourism and visitor activities in Downtown in order to generate new opportunities for the overall expansion of Downtown economic activity.

Tourism is a major economic driver for the region. Historic and cultural assets, the River Walk, and the Henry B Gonzalez Convention Center are major attractions that will continue to grow visitation to the City. Growth of tourism has always had a major impact on the overall growth of Downtown. The high value generated by tourism businesses and hotels has made the development of other uses (e.g. residential and office space) difficult in the City’s core and has led to reluctance in the development and development sectors to be bring other products to market. Hotels and tourism related businesses have begun to expand outside the core of the Central Business District (CBD) and are impacting growth in emerging areas of Downtown. Proactive stewardship of tourism growth is needed to make sure there is a sustainable economic boost generated by visitation to Downtown.

Continue to invest time and resources into the management of Downtown growth and partner with existing and new urban place management organizations to guide and maintain public investments.

The support of urban place management organizations for a wide variety enhanced services and amenities can help provide the curation and day-to-day support of these districts that the City or businesses cannot provide alone. The City has already utilized these districts (examples include Centro, Zona Cultural, Hemisfair) to guide, protect, and maintain public investments and to promote and plan for future investment in these areas. The focus areas identified within the Downtown Area Regional Center Plan should be supported through the use of these organizations to help implement and maintain planned investments. In some cases, existing entities such as Centro are already serving these areas or could potentially expand to support the growth of these areas. Other focus areas may benefit from the creation of new organizations to help support their growth. The City has invested significant resources and time into the support of Downtown growth through the “Decade of Downtown” efforts, SA2020, and the creation of the Center City Development Office (CCDO). The next phase of Downtown’s growth may have different needs, and the continued efforts of the City through CCDO and others are needed to support the next evolution of Downtown and to implement the Downtown Area Regional Center Plan.