How Your Voice Matters

The success of the SA Tomorrow Sub-Area Plans depends on broad participation from area stakeholders. To ensure this success, City Staff worked with a wide range of community members throughout the planning process. These include neighborhood associations, business and property owners, residents, employers, educational and cultural institutions, public and nonprofit organizations, and other City departments to create a realistic and implementable plan for the Downtown Area.

The planning process was designed to be iterative, creating a “feedback loop” between the City and the community as the plan was developed. This approach ensures that the Sub-Area Plan reflects community values and priorities. A variety of tools and tactics were used to ensure that those interested were well-informed about the SA Tomorrow Area Plans; encouraged to participate in a range of stimulating events and activities; and engaged in providing constructive feedback on a preferred future.

For each public input exercise, this document describes what was asked, how the input was presented back to the stakeholders, and carried forward in further engagement exercises and eventually incorporated into the plan.

Results from the exercises and surveys are available in the website Documents Library and as an appendix to the Plan. In some cases, results have been summarized. Throughout the process, complete raw results from exercises have been posted on the plan webpage.

To facilitate public information and community participation, the Downtown Area Regional Center website was created and made available to the general public on (insert date). The website includes a section for leaving comments which are sent directly to the project manager. These comments can be viewed here.

The second Planning Team meeting was held at the San Antonio Central Library Auditorium in the Downtown area. Planning Team members started to identify the themes of a vision for the Downtown Area Regional Center Plan through facilitated discussion by the project team. The results of Exercise 2 were posted to the plan website and distributed to the planning team. This exercise helped inform the draft plan vision and goal statements. 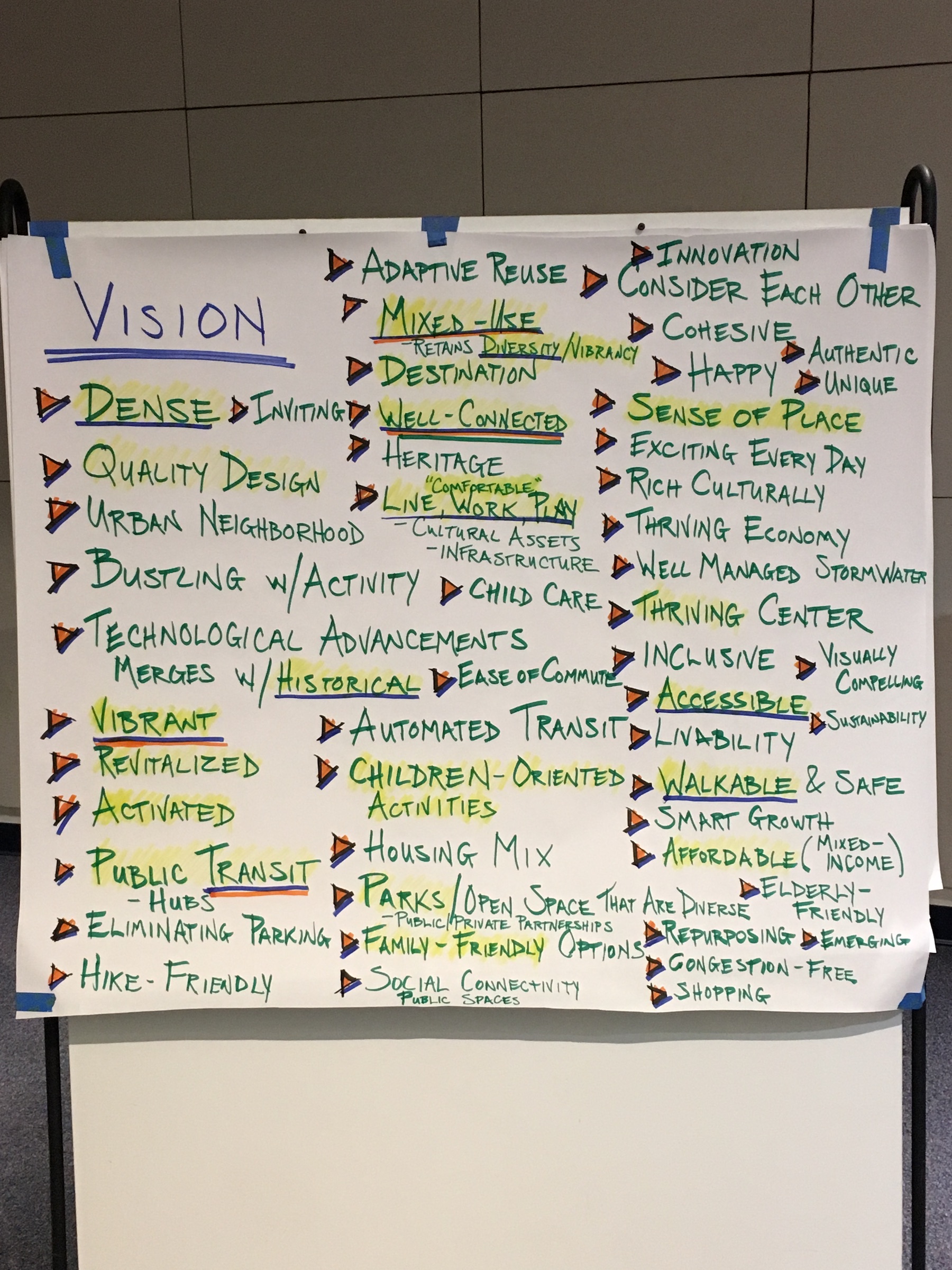 The first Downtown Area Community Meeting was held at the La Orilla Del Rio Ballroom located at 203 South St. Mary’s Street. Spanish interpretation services were available. The objectives of this meeting were to develop the draft vision statement and goals for the Downtown Area Regional Center Plan. Community members participated in several facilitated small group exercises. In the first exercise the groups identified what they thought should be preserved, added, removed, and kept out of the Downtown Area. Next the groups discussed their results to come to a consensus on the most significant opportunities facing the Downtown Area and the greatest challenges to taking advantage of these opportunities. The vision and goals exercise asked community members to write a statement describing how they envision the future of the Downtown Area. Facilitators encouraged community members to think about elements such as housing, connectivity, mobility, parks and open space, shops, restaurants, employment and other amenities. Small groups identified common themes amongst their group’s individual vision statements. From these common themes, each group completed a summary of their ideas which was then read aloud by one spokesperson from each group to the entire audience. Examples of group summary images can be seen here. Results of Exercise 3 were posted to the plan website. These results directly informed the draft vision and goals statement. 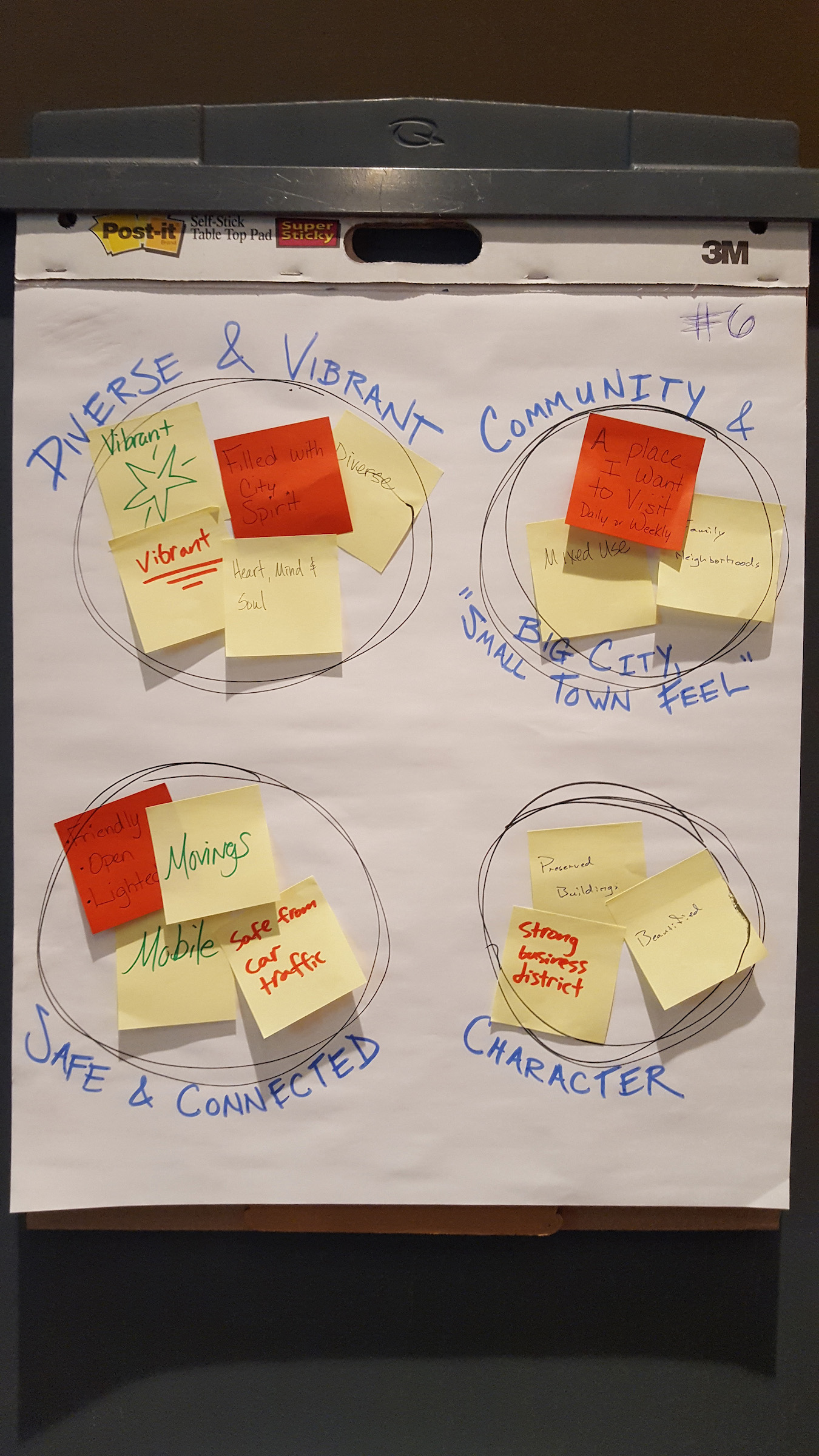 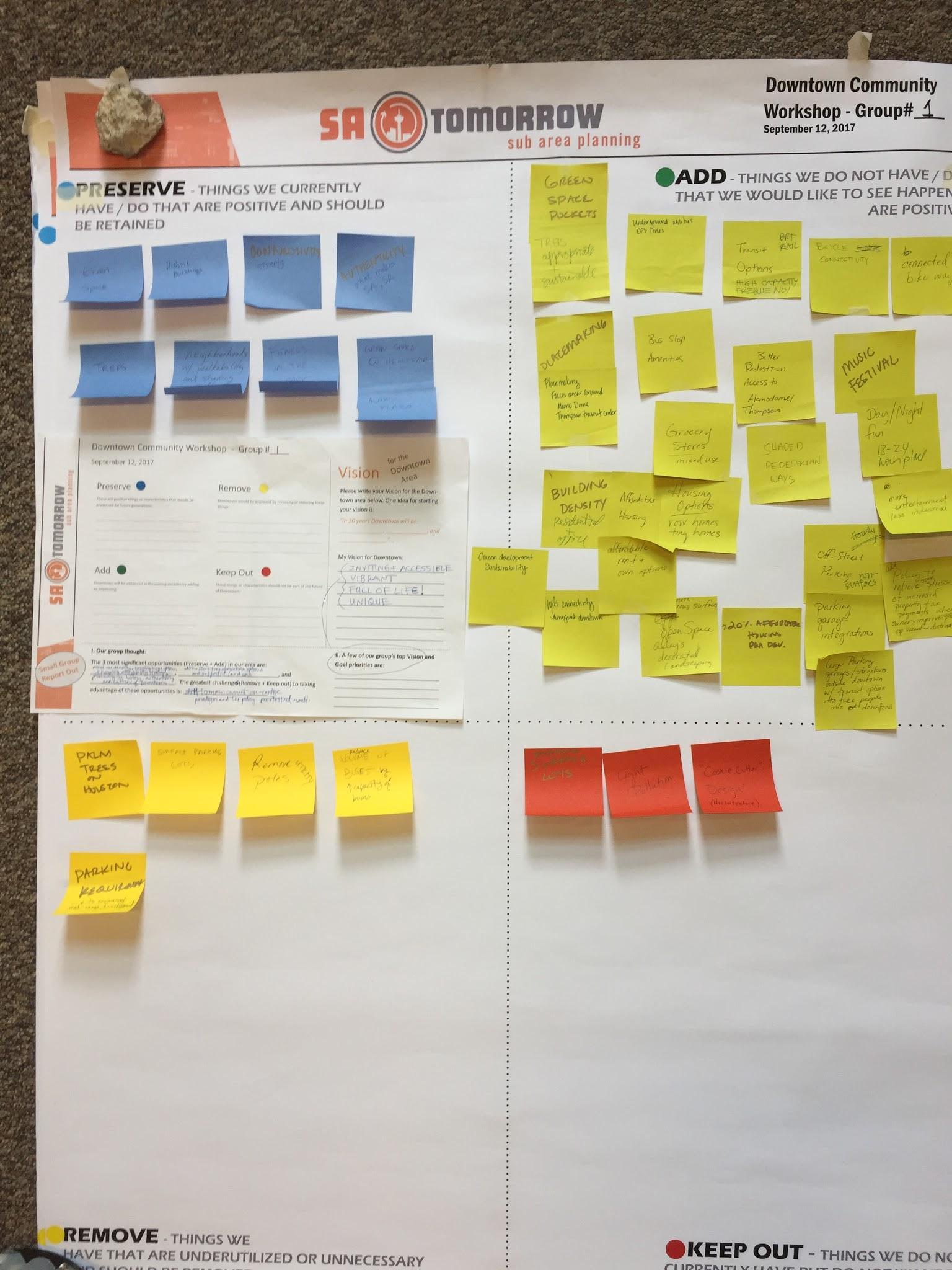 The third Planning Team meeting was held at the Steves Homestead River House, located in the King William neighborhood. Planning Team members were presented with a summary of the community feedback received up to that point, which informed the draft vision statement and goals. During this meeting, the initial draft vision statement and goals were presented for facilitated discussion and comments. The Planning Team suggested that a long-form vision statement was useful, but too lengthy to be effectively communicated with the public, and requested a “tagline” version be drafted. The results of Exercise 4 were included in the meeting summary posted to the plan website. 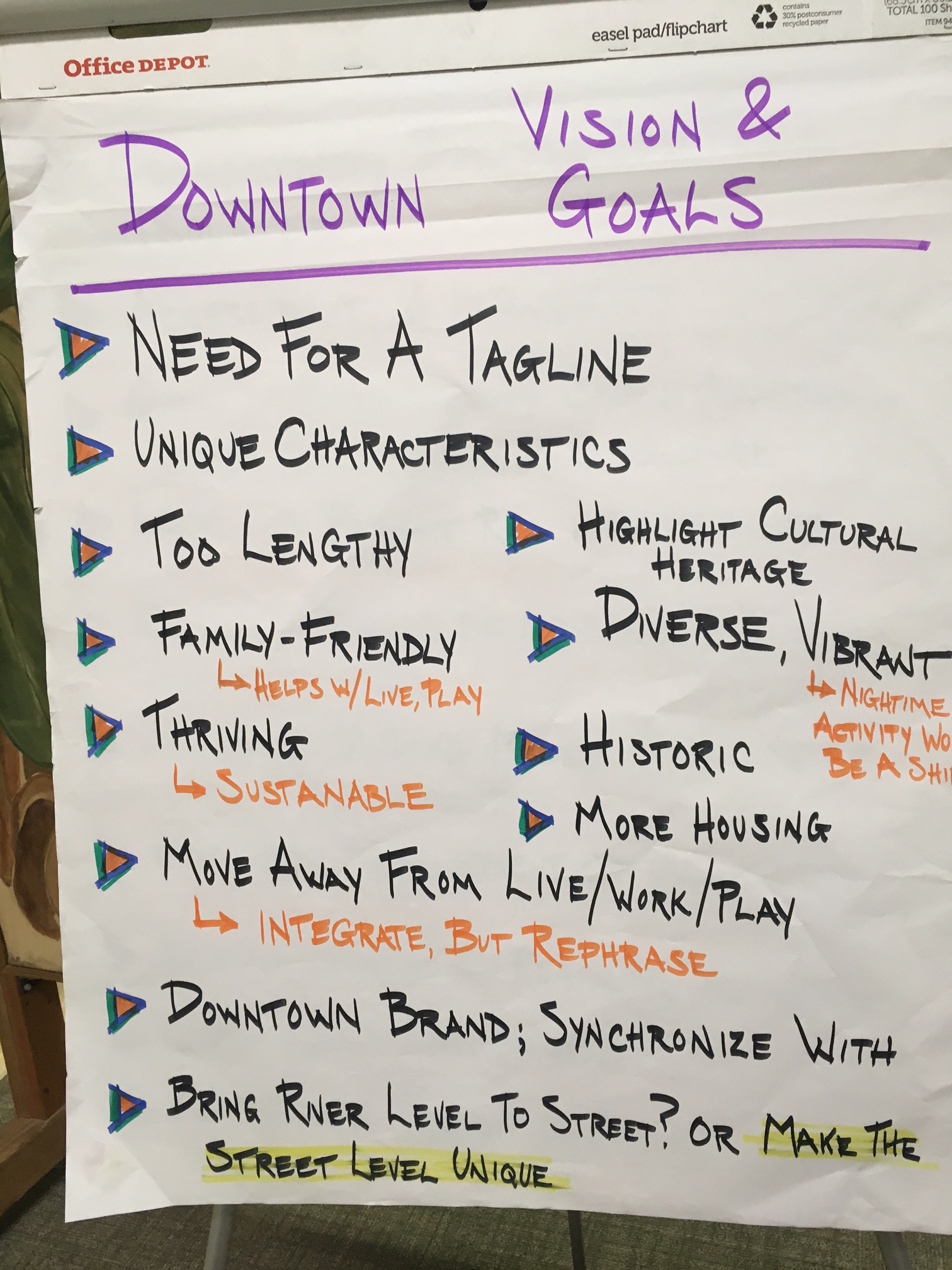 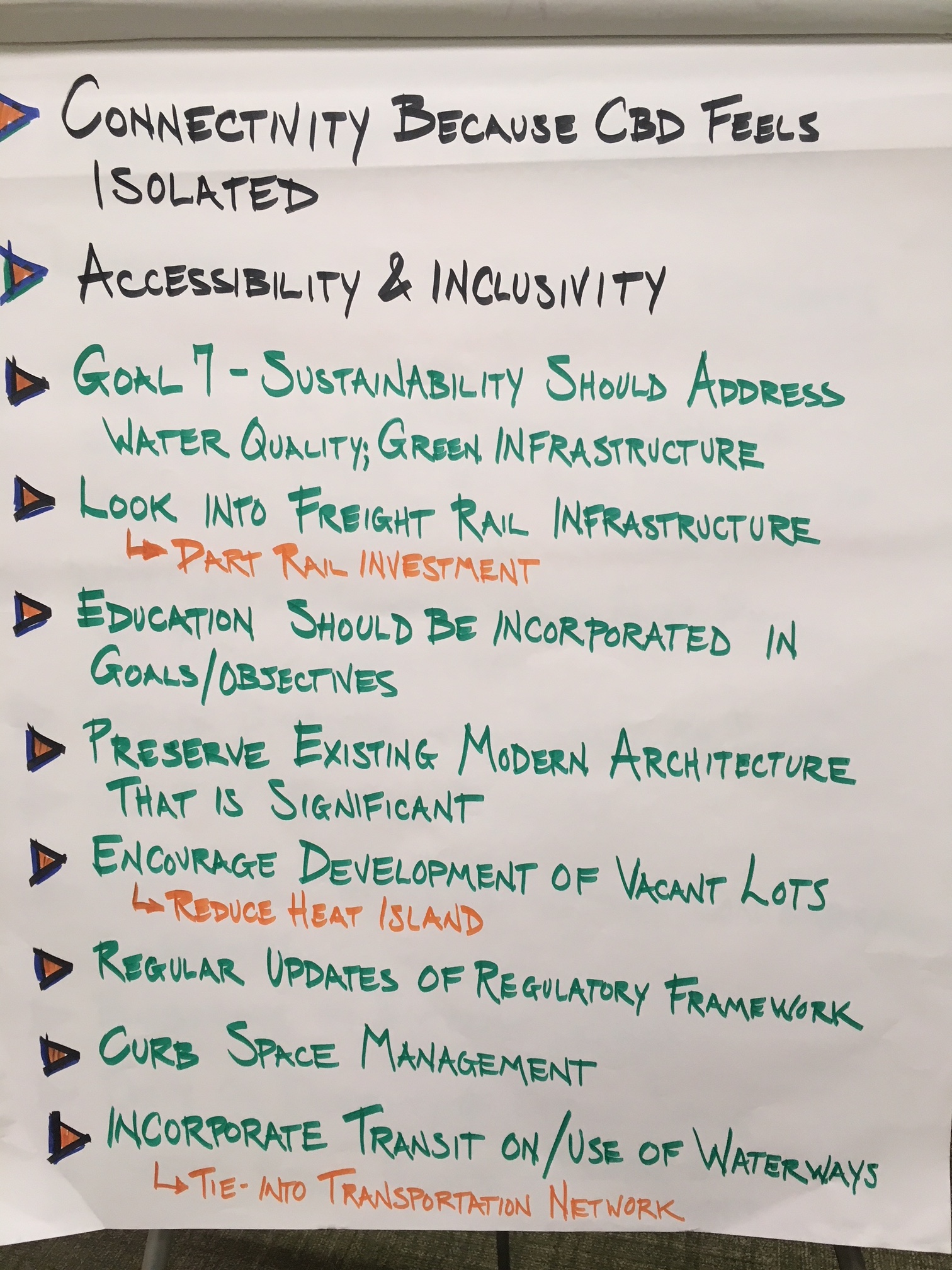 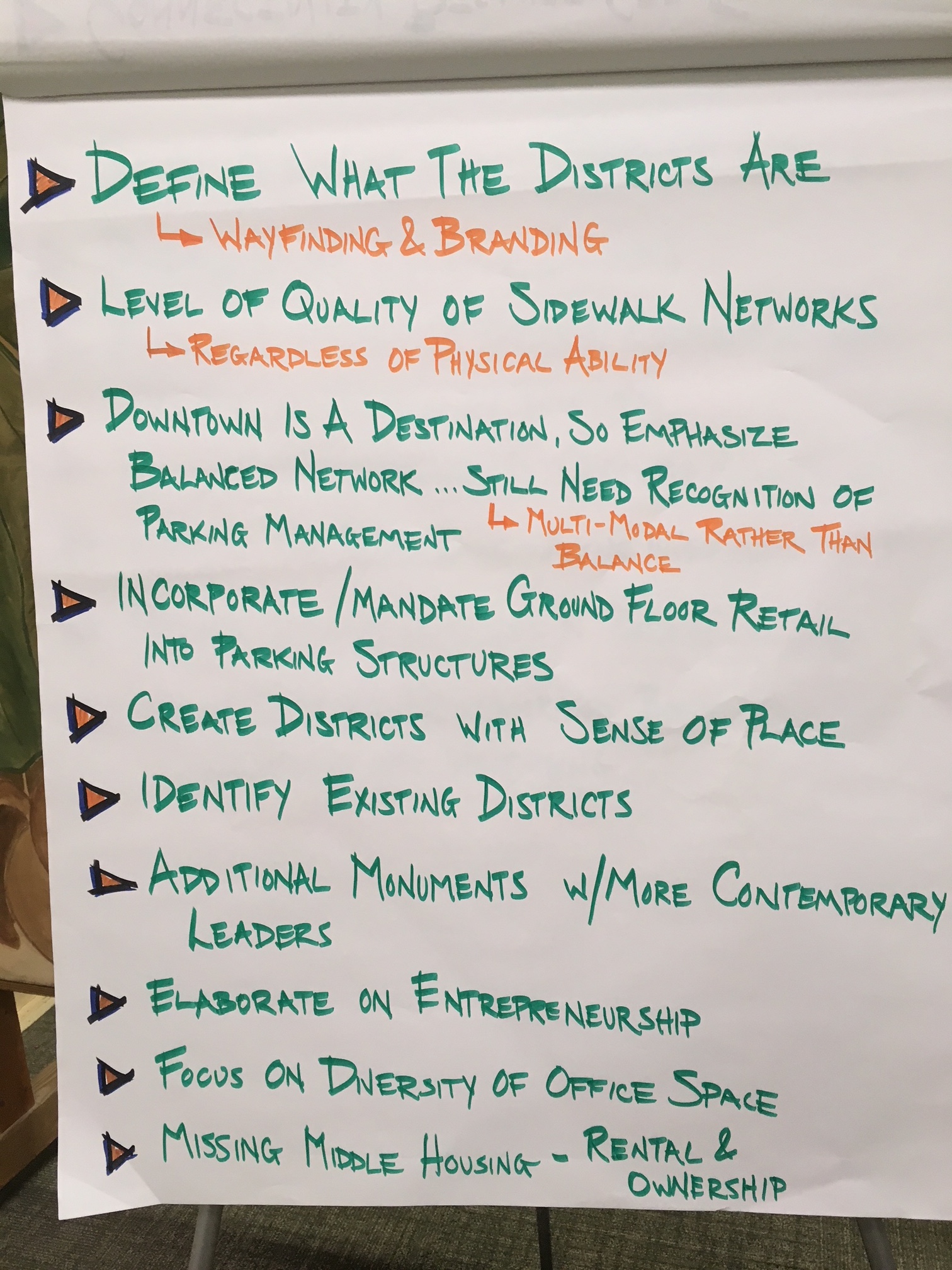 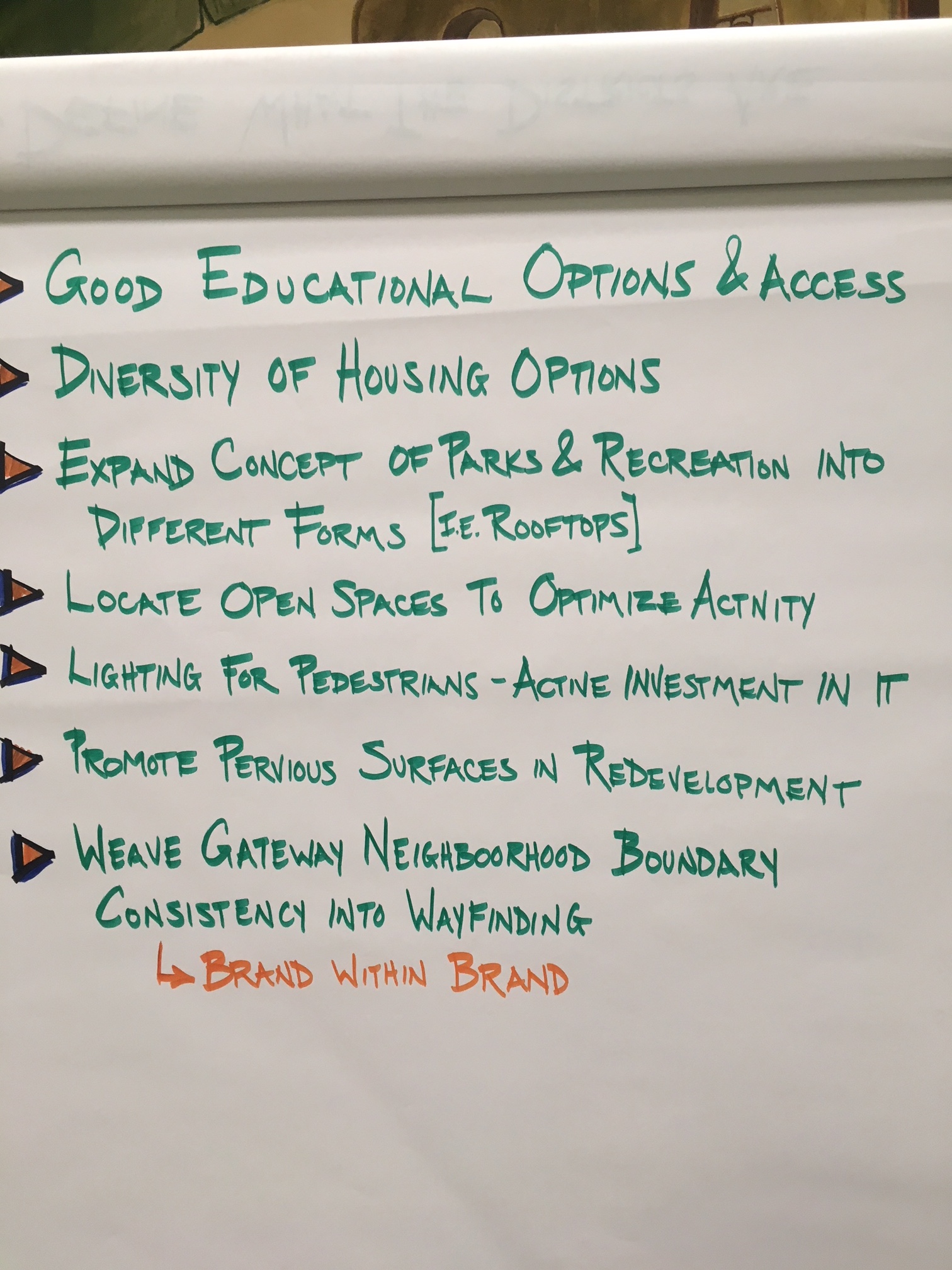 The second Downtown Area Community Meeting took place in the Roosevelt Park Clubhouse. Spanish interpreters were available. Participants were invited to comment on the Plan’s emerging Vision and Goals.  The exercise asked participants to use colored markers to highlight (or add comments) words or statements of interest to them: Green= “Like”, Blue = “Add”, Red = “Dislike”. Results of the exercise were posted to the plan website via the Community Meeting #2 Summary. These results led to a final refinement of the Downtown Area Regional Center Plan Vision and Goals statements. The results of Exercise 6 were included in the meeting summary posted to the plan website. 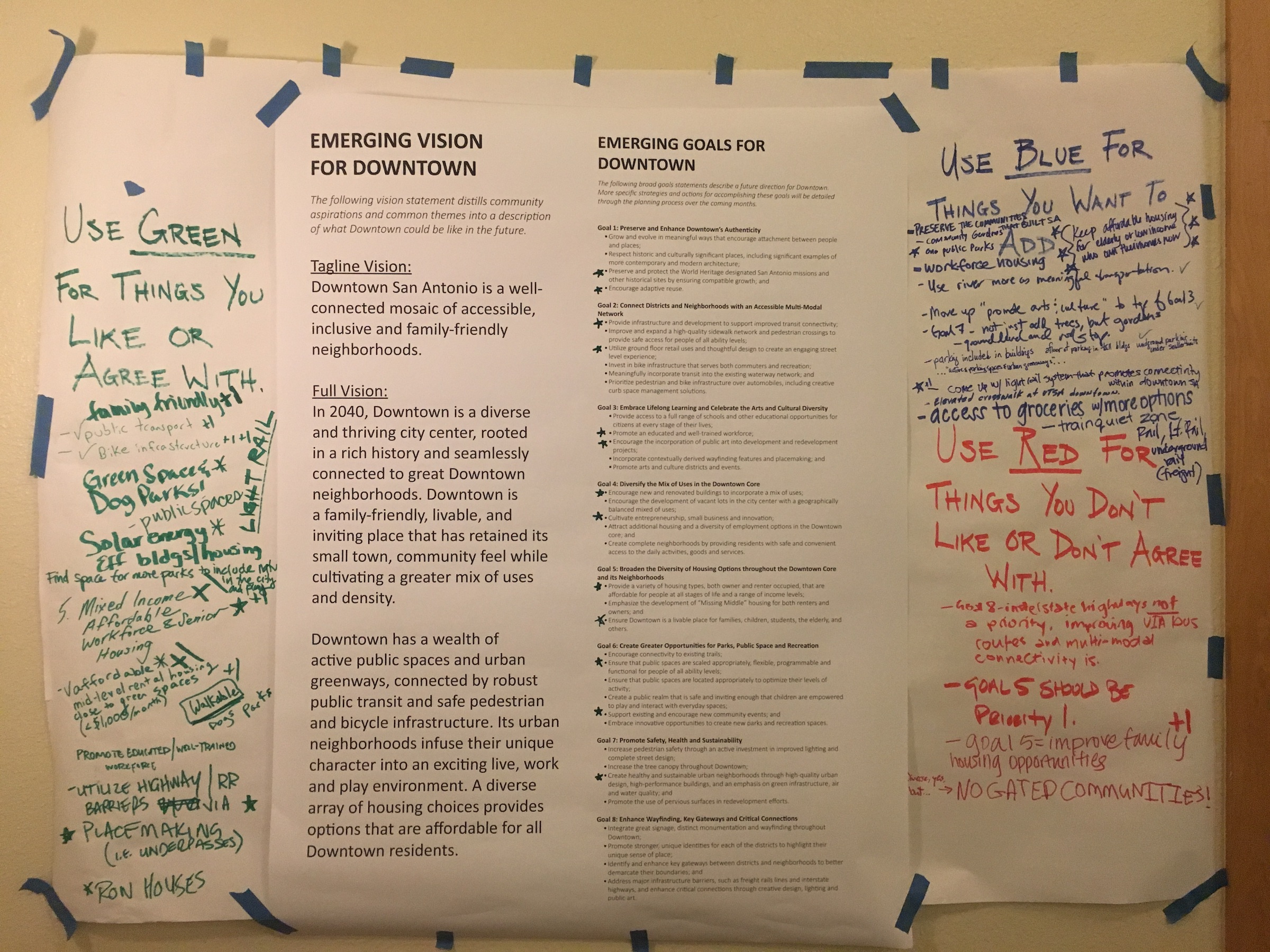 Community members left their comments on the emerging vision and goals for the Downtown Area. 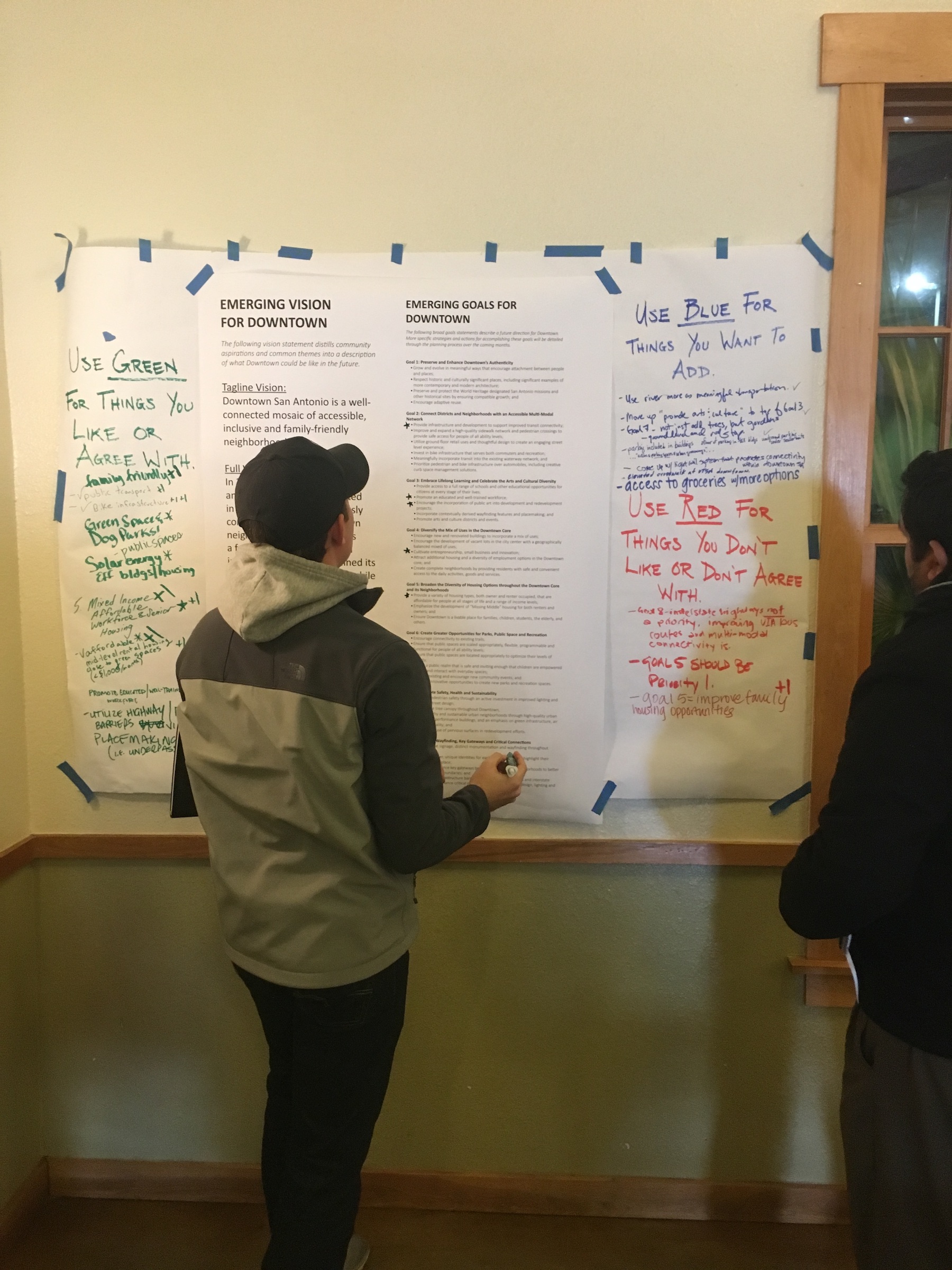 Establishing the Plan Framework and Recommendations

The Downtown Area Regional Center Plan Framework was developed through a combination of technical analysis and community input. The Framework illustrates and outlines the overall long-term vision for the Downtown Area Regional Center, including areas where new development will be focused, key mobility improvements, opportunities for more parks and open space, and other “big moves” that will shape the future of the area.

At the beginning of the planning process, the project team developed an in-depth study and analysis of the Downtown Area Regional Center to understand the history and development of the area as well as existing conditions. The Planning Team shared their input regarding area assets, opportunities, and challenges to develop a more nuanced understanding of the Regional Center and the community’s values and priorities. City staff also conducted additional stakeholder and public outreach to capture input from a broad range of Downtown Area residents. Through a series of facilitated work sessions and interactive exercises, the Planning Team provided input and direction that is reflected in the Plan Framework.

Over several months, project staff and the Planning Team worked collaboratively to build upon the Framework to identify the key priorities, improvements and strategies that will shape the Sub-Area Plan and guide growth, development and investment in the Downtown Area Regional Center. A series of draft recommendations on several topics were developed for stakeholder feedback and are reflected in the Plan.

The focus of the third Planning Team meeting was to develop key plan concepts such as focus areas, mixed-use corridors, parks, open space, and recreation, trails, priority transit routes, priority bicycle routes, and priority streetscape improvements. Meeting attendees split into groups to create their own framework diagrams which were then synthesized by City Staff to create the base for the plan framework diagram. At the first Community Meeting, community members participated in small group exercise to map strengths, weaknesses, opportunities, and threats which were described verbally and then symbolized on a map. This feedback was also incorporated into the framework diagrams. At Planning Team Meeting #6, the Planning Team discussed several catalytic sites which also became part of the plan framework diagram. The catalytic sites were chosen from the Focus Areas identified at previous meetings.

An example of a trace paper map from Meeting #3

Mobility was discussed at Planning Team #3 as part of drafting the Plan Framework. A variety of transportation options were considered when planning for the Downtown Area Regional Center. Trails, transit routes, bicycle routes, streetscape improvements, pedestrian safety, and traffic congestion were discussed in order to create a layered multimodal transportation network. At Community Meeting #2, participants were asked to complete two activities to help City Staff prioritize different routes for different modes of travel, and to explore how to allocate right-of-way to alternative modes of transportation and street elements within a constrained street environment. Major corridors were identified on the mobility framework diagram. Participants then voted using stickers with bus, car, and bicycle icons to symbolize what mode of travel they thought needed to be prioritized on each street. The other activity featured two major thoroughfares in the area. Participants then chose elements such as bike lanes, turn lanes, and medians to design streets for their preferred modes of transportation.

During Community Meeting #2 participants reviewed images of a range of housing types and identified which types of dwellings they thought would be appropriate in different areas of the Regional Center by placing a colored dot marker on the map. Participants were also asked to review information on area demographic and economic characteristics, housing and transportation costs, and a comparison of typical area incomes to rental costs. During Meeting #5, the Planning Team discussed preliminary housing objectives and strategies. During a robust discussion, Planning Team members explored key issues and potential strategies such as affordability, opportunity, historic character, capacity for growth, and quality of life. Notes from the discussion were recorded on flip charts.

The Planning Team also discussed preliminary economic development objectives and strategies during Meeting #5. After a presentation by city staff and consultants the Planning Team explored critical challenges and potential strategies such as target industries, tourism and convention business, and opportunities to build on an emerging tech district. The notes from this discussion were recorded by city staff for on charts.

Flip charts used to record notes on housing from meeting #5

Over 100 engagement activities such as interviews, intercepts, & focus groups with stakeholders from the following groups:

City of San Antonio Department of Arts and Culture